I don’t know if anyone else has noticed lately, but the amount of manga relating to virtual reality seems to have been on the rise. And I don’t mean virtual reality as in character-gets-sucked-into-fantasy world, I mean full on computer game virtual reality. MMO-simulations, death trap computer games, mobile games, a “gameified” world… etc. I made a brief timeline of some of the better known series below.

In real life, Roto, Boromid and Ah-Dol are average kids with average problems, but in the virtual world of Lost Saga, they’re heroes. They might even become legends… if they can stop bickering long enough to level up. Whether it’s werewolves running rampant or a gorgeous pair of troublesome thieves, our boys must be ready for anything, because in Lost Saga nothing is what it seems and murder can happen with a click of a mouse.

Welcome to The World, the most advanced online game ever created. Fourteen-year-old twins Rena and Shugo are two middle-school students who enter The World as level-one game characters–and now they’re ready to take on anything…or so they think. When Shugo’s character dies, he is transported to another level where he is entrusted to bear the Twilight Bracelet by the mysterious Aura. Shugo must find out who Aura is and why she gave him this powerful weapon to protect his sister from the dangers in The World.

It is the year 2100 A.D., and humans have developed a virtual reality game with a realism level of 99%. Feng Lan, due to a bet with her twin brother, vows to succeed in playing the game without using her “female benefits.” Due to this, she becomes the first and only female to play as a male character in “Second Life.” As her infamy rises as a bloodthirsty warrior, can she keep her identity a secret from her real life acquaintances whom she has beaten up?

This new releases, from the author TAMAKI Nozomu, is a funny and futuristic story about a guy who is into MMORPGs in which you are able to feel what your character does… meaning that he uses it for having sex!

Katsuragi Keima is known on the net as the god of getting the girls while in real life he’s known as otamegane and he hates all real girls. However he is approached by Elsie, a devil from hell, to help her in catching runaway spirits that hide in people. Apparently the spirits only hide in the hearts of girls and the only way to get the souls out is by making the girl fall in love so the spirit gets forced out. And he’s not allowed to fail or he will lose his head.

Ryouta Sakamoto is one of the top-ranked players of BTOOOM!, an online battle game. But no amount of simulated warfare could have prepared him for what is to come. Ryouta wakes one evening to find himself dangling from a tree by a parachute with no recollection of how he got there. Before he can orient himself to his unfamiliar surroundings, Ryouta is attacked. As a barrage of explosives rain down on him, Ryouta realizes that he too has a pack of bombs that look very similar to the ones used in BTOOOM! Ryouta may have mastered the online game, but can he come out on top in this real-life game of survival?!

In the year 2022, gamers rejoice as Sword Art Online – a VRMMORPG (Virtual Reality Massively Multiplayer Online Role Playing Game) like no other – opens its virtual doors, allowing players to take full advantage of the ultimate in gaming technology: NerveGear, a system that allows users to completely immerse themselves in the game world by manipulating their brain waves to create a wholly realistic gaming experience. But when the game goes live, the elation of the players quickly turns to horror as they discover that, for all its amazing features, SAO is missing one of the most basic functions of any MMORPG – a log-out button. Now trapped in the virtual world of Aincrad, their bodies held captive by NerveGear in the real world, users are issued a chilling ultimatum: conquer all one hundred floors of Aincrad to regain your freedom. But in the warped world of SAO, “game over” means certain death – both virtual and real…

A gate appears in Tokyo’s Ginza district sometime in the 21st century. From the gate pours out monsters, knights from middle-age Europe, and other fantasy-like beings, and they kill many of the citizens of Tokyo. This event is known as the Ginza Incident. The government sends a small group of soldiers from the Japanese Self-Defense Forces (a replacement for Japan’s military) to the alternate world beyond the gate. Led by otaku soldier Youji, they find that the villages in the world are being attacked by a dragon. An elf girl who is a survivor from the dragon’s rampage joins the group in their travels across the dangerous new world.

When thirty thousand Japanese gamers are suddenly trapped in the online game world of “Elder Tale,” a realm of swords and sorcery–that was, up until yesterday, very much a fantasy–is now their cold, hard reality. Severed from their everyday lives, they’re faced with fighting monsters, eating food with no flavor, and being unable to die?! Amid the chaos in “Elder Tale” Akihabara, veteran gamer Shiroe locates his old friend Naotsugu and teams up with the beautiful female assassin Akatsuki. Together they embark on an adventure to change the world as they know it!

Han Jee-Han, a normal high school student, suddenly develops a special power where his entire world is shifted into a game-like setting. He can see the power levels of people, look at the stats of a seemingly normal item, get abilities, and even level up! Follow Han Jee-Han as he discovers how to use this power, and maybe even where it came from.

Dice: The Cube that Changes Everything (manhwa) [+ show][- hide]

Dongtae is rock bottom in everything. Looks, grades, life, everything. But all that might change. If you could change your life by playing a game, would you?

Tagami Yusuke, led by a mysterious voice, is summoned to another world, “Caltsio”. He was just a young video-game lover, but Fate decided to make him become the “Evil God of Calamity” of this world, obtaining the ability to create and customize everything, Customize Creation.

The internet is full of rumors about the Neet and Hikikomori genius gamer siblings Sora and Shiro. The two go as far as to refer to the world as a “shit game”, but then one day a young man calling himself “God” summons them to a parallel universe. There, God has forbidden war, and “everything is to be settled with games”. Yes, even the national borders. Driven into a corner by other species, the ‘human species’ is down to its last city. Can Sora and Shiro, these recluses of society, become the saviors of humankind in this parallel world?

Ataru Kashiwagi is a friendless high school student, living alone with his sister. His only real social interaction happens online with his 1,540 followers on Real Account, a sort of Twitter/Facebook amalgamation. One day, Ataru is summoned into a virtual world with 9,999 other users by a dark figure dressed as the smiley-faced mascot of Real Account, where he is forced to play a deadly game. The rules are simple, if anyone dies in the virtual world, they die in real life – as do all of their Real Account followers. How will the users’ online friendships hold up then…?

Tomokui Kanata has been re-incarnated into the weakest goblin, named Rou, after having undergone an unfortunate death. However goblin Rou has retained his previous life’s memories, an unusual evolution, as well as becoming strong enough to gain status boosts from eating. In this alternate world of survival of the fittest, events unfold with competent subordinates and comrades, delightful case of the tail-wagging dog – long-awaited survival fantasy by Komikaraizu.

“THE NEW GATE”, an online game that trapped its players and turned into a death game, was now releasing the thousands of players that had been dragged into it, thanks to the efforts of Shin, one of the most powerful players. But after having defeated the last boss and freed everyone, he was swallowed up by a strange light and found himself inside the game world 500 years in the future and unable to leave

As you can see, from 2000-2006 there were few series relating to the subject. The series that were created tended to be lighthearted and a fun despite addressing more serious themes from time to time. They were also all quite long, and involved extensive fantasy MMOs that the main characters engaged in.

From 2007 we begin to branch out. At this point the pace has sped up to about 1 series a year, and we’re seeing more different kinds of games. There are dating sims, battle games, and even the MMOs are taking on a darker tone. Players are “trapped” in the game world with no means of escape. In “Gate,” the game world meshes with the real world, and in “Log Horizon” it’s also unclear whether players are trapped or whether the real world underwent some sort of transformation to match the game world.

Starting from 2013 we see an explosion of game-related stories. An interesting trait that has popped up is that in many of these series, such as The Gamer, Re:Monster, and DICE, the games are so integrated into real life that there is basically no distinction. It isn’t a character signing into the computer anymore, the world is the game. On top of that, many of the stories have an all-powerful god figure that is left unexplained (as of the time being) and the stories spend a lot more time exploring human nature itself as the problem rather than having the antagonist be something like a convenient deranged hacker whom the “good guys” are fighting against. 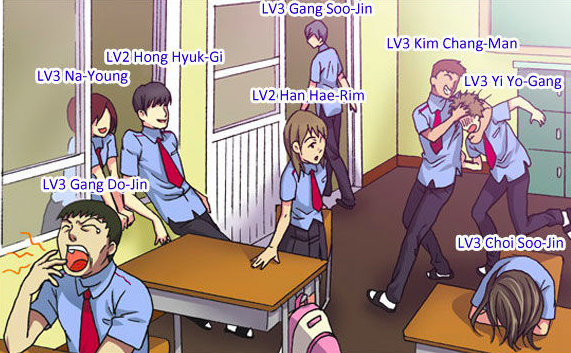 What does this mean? Personally, I think this reflects how integrated technology has become in our day-to-day lives. Is this a good thing or a bad thing? Well, I’ll be waiting for all those series to resolve themselves to see what the authors’ takes are!

What is your take on immersive gaming and how it’s affecting the world? Let me know in the comments! (:

How to Find New Manga When You’ve Read It All
The Difference Between Manga, Manhua, and Manhwa
Why Did I Start This Blog?
Manga Review: Onani Master Kurosawa
Who Is Foxy?