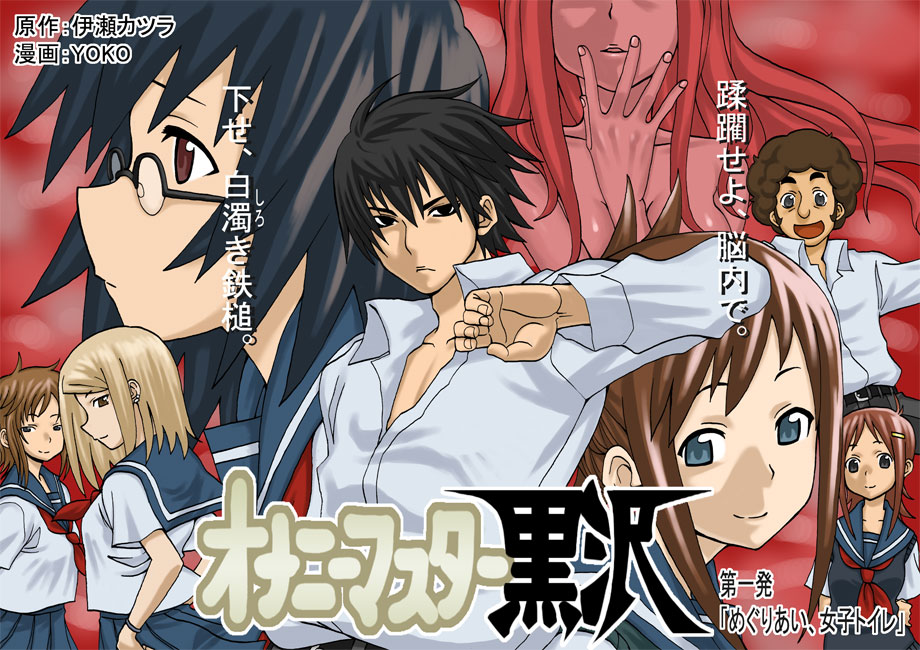 Aha, finally something that’s not a full-color webtoon! (Yes, yes, I’ve been in a webtoon mode lately.) The artwork of Onani Master Kurosawa is sketchy and looks more like it came out of an unfinished sketchbook than a published comic. I’ve heard that it was originally a doujin, so that may be the reason.

Personally, I am a fan. I like the slightly unpolished feeling it gives to the work. I would NOT like it if in addition to the sketchy art-style, the panels were also reduced to four-panel comic strip squares or if the author skipped out on drawing backgrounds entirely, but Onani Master Kurosawa does not do that.

The story is the greatest part of this manga. Do not be fooled into thinking it’s an ecchi manga because it’s not! It’s got a very well-thought out plot, and the pornographic parts start slowing down about halfway through the series in lieu of more character interaction and development. 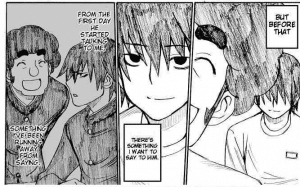 The second half is cathartic. I have no words for it really. This is where character interaction, character development, and all of the different relationships really start picking up, and it’s absolutely fantastic. By the end of it all you are left feeling very warm, fuzzy, and happy.

As I’ve said above, all of the characters are great. I’ve only included descriptions of the two primary characters below, but you really get a good sense for all the side characters in the class as well as shifting class dynamics. It’s pretty realistic compared to some classroom mangas where the protagonists pretty much live in a vacuum with their group of friends and everyone else is just a filler silhouette. The author also shows multiple sides of many side characters instead of just a flat stereotypical characterization of bully, popular girl, otaku… etc, which is refreshing to say the least.

Arguably one of the best main characters I have ever read about. For one, it’s a male protagonist in what would generally be considered a school-life, shoujo setting, which is a refreshing change. For another, he starts the series terribly, terribly messed up. I mean, just read the series summary. A completely twisted guy. A number of his expressions and attitudes (in the way they’re drawn) semi-resemble Light Yagami from Death Note. I’ve heard that the author is a big Death Note fan.

Described as a small, squirrelly girl, Kurosawa meets her in the beginning and immediately marks her to be an antisocial, shy student like himself. She is very quiet and often the victim of bullying by other girls in the glass. However, she and Kurosawa encounter each other more than once, and she turns out to be much more than what Kurosawa had bargained for…

Honestly, the quality between the two groups is not too different. Both groups leave bubbles that are purely punctuation marks, such as ellipsis and exclamation marks, the same as the original. This is nice as it looks like the author hand drew the punctuation, and it fits in well with the art. Neither group erases the sfx, which is also hand drawn and very much integrated into the imagery, but it might have been nice for non Japanese speakers if they had provided translations. :< Other than that I only noticed very minor spelling differences (“Haah” vs “haa”) and differences in font, pretty much neglitible.

This series is not licensed in English, so there are no official translations or publications out for it.

Unfortunately, a lot of the series rides heavily on suspense, and the amount of tension that builds up becomes absolutely torturous, which is great if you’re reading the series for the first time – keeps you hooked wanting to know more! – but might be too torturous for you to want to suffer through a second time, once you know what’s going to happen. This is, in truth, the reason I haven’t really gone back to read the series despite knowing how good it is. For me, at least, the reread value of this series is extremely low. Also, a lot of future events depend on the built-up tension and suspense from earlier chapters, so if you skip ahead the story also isn’t as enjoyable as when you read the whole thing in one go.

For a feel-good manga with a similar art-style, similar warm fuzzy feels, but not so much intense suspense, try the author’s other work Molester Man. And yes, I know what the title sounds like, but trust me, that’s not it. ;p Some other titles which I remember have more penciled and sketchy art include Blade of the Immortal, Rurouni Kenshin, and Neon Genesis Evangelion. However, none of them are quite like this author’s style, and the stories are also quite different and more shounen/fighting focused.

For a redemption story or a story about a similarly isolated protagonist and his character growth, try Koe no Katachi.

For a story that delves intensely into the cruelty of bullying and the much darker aspects of it, try LIFE.

For more psychological suspense and intensity, try Liar Game or Death Note which I mentioned above. I recall Mirai Nikki was also very tripped up, although I read that so long ago I don’t really remember.

Lastly, if you’re naughty and looking for more borderline-H/ecchi in a similar setting, try /Blush-DC – Himitsu.

An excellent series all in all. Very cathartic, very uplifting, and the beginning draws you in very quickly. Read if: