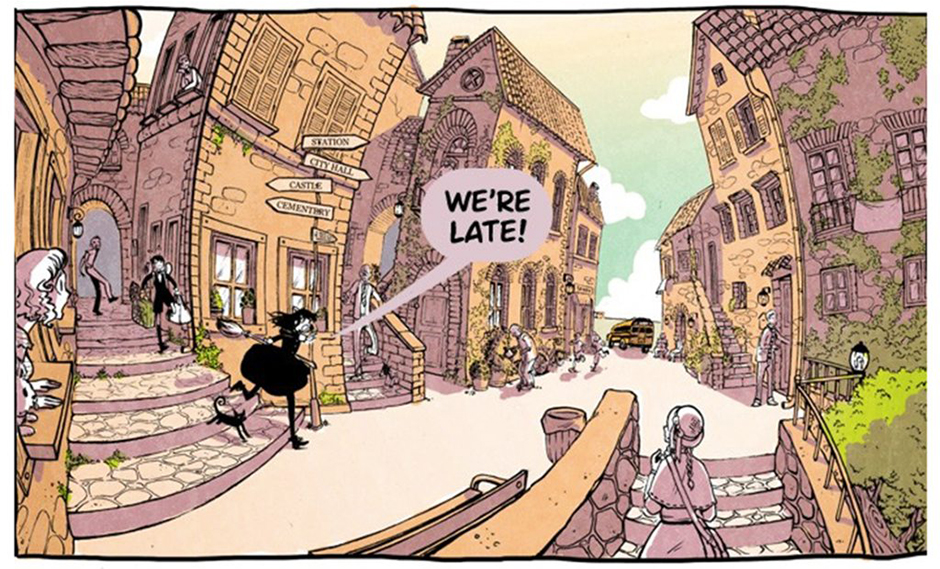 Hello guys! Today I wanted to review one of my absolute favorite LINE webtoon series, Hooky. Hooky is unique in that it isn’t really a manga, manhwa, or even manhua – it is an original English work! The author, Miriam Bonastre Tur, speaks Spanish as her native language, and if I’m not wrong Hooky is her first full-fledged work in English. Not that I can tell, as it is very well written.

The artwork in Hooky has a unique style, one I wouldn’t class as either stereotypical “anime” art or something like the “Western” art that we see from Marvel and DC.

Typical anime art is often marked by sharp features, elongated limbs, and hair that always seems to stay perfectly “messy” and/or defying gravity in all sorts of strange ways, leading to some interesting cosplays (think Goku’s hair in Dragonball for a classic example).

In Western comics, on the other hand, people tend to be realistically proportioned, as are their faces and hair. The one thing that often does gets exaggerated is detailed musculature (see the Hulk for reference).

What about Hooky? Hooky has a cast of purely Western characters which are drawn in a rounded, softened way which is nothing like Marvel or DC. Yet they also don’t quite fit into the doey-eyed ranks of bishounen or bishoujo… it’s something else altogether, with clean color and detail added to a more simplistic, cartoon-like base style. 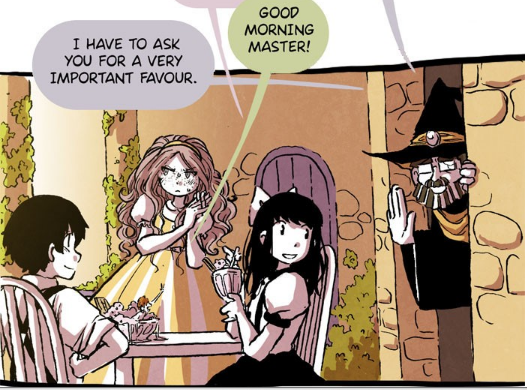 If I had to label it, I would say Hooky’s art has a distinctively Spanish flavor. The gorgeous backgrounds and quaint cobble-stone streets are reminiscent of the bright, lively city of Barcelona, which also happens to be the author’s hometown.

Hooky truly brings the magic of childhood back to life. If you liked Gakuen Babysitters or light fantasy such as The Enchanted Forest Chronicles, you’re going to love Hooky. The twins Dani and Dorian are absolutely delightful, and their liveliness and hilarious interactions will just leave you feeling happy after each episode.

With that said, however, the story itself is not as innocent and frivolous as it may seem. At the core of the story lies the conflict between witches and regular humans, and the author doesn’t “dumb it down” it in any way. There are those who are out to burn every last witch alive. There are those who want to overthrow the human kingdom. There are neutral parties and those who work hard to keep the peace. All of this is gradually revealed through the lens of innocent children who don’t know anything, who just want to play and befriend people on either side, who don’t realize or understand (at the beginning) just how deeply this grudge runs and why it is this way. It’s as much a coming-of-age story as it is lighthearted fun, and the pure, innocent lens the author chooses to portray this conflict with makes it all the more poignant.

The adorable twins who miss the bus on the first day to school and become the protagonists of this story. Dani (full name Daniela) is the lively, energetic one whose magic unfortunately often ends up a mess, whereas Dorian is more serious and is often found with his nose buried in a book. Dorian excels at magic and his studies, but has a more timid personality and is not able to make friends as quickly or easily as Dani. Their family, the Wytte family, appear to be big shots in the wizarding world.

A loud, flamboyant, and outgoing boy, who appears to have many friends and is well liked on the streets. He lives with Pendragon, the magic “master” who takes Dani and Dorian in after they miss their bus to magic school, and appears to think of Pendragon as his surrogate father. An adventurous and headstrong character who can also be quite rude at times.

The princess of the realm. She is out searching for her missing prince William when she runs into Dani, Dorian, and co. She ends up staying with them at the master’s place and begins to pick up a little magic here and there herself, despite initially looking down on magic. Her father is the king whom some of the witches hate and wish to dethrone.

One of the best things about Hooky is that it is a webtoon published straight on the web AND originally in English, which means that there are neither scans nor translations to worry about. The author’s English is flawless as far as I can tell, so get on LINE Webtoon and start reading!

Medium. As much as Hooky is delightful and the little character moments a pleasure to read and read again, there is a strong plot with emphasis on mystery and surprises. Who will become king of the witches? Will this character turn evil or not? Are they all walking into a trap/whose side is that character really on?

Chapters often end on cliffhangers like these, and those little surprises and reveals are part of the joy of reading Hooky. In fact, this is one of the series I would recommend following along week by week rather than waiting for the complete story, as I think it’s part of the experience. (Aside: the comments on LINE Webtoon are sometimes as good as the story itself!) On the flip side, this means that once you know the answers to those mysteries, it won’t be quite the same the second time around.

The first vibrant and delightfully childlike story that comes to mind is Gakuen Babysitters. However do note that this is missing the fantasy element of Hooky.

If you’re just looking for feel-good stories featuring kids and their sense of wonder/unique ways of interpreting the world, Yotsuba&! and Bunny Drop (Usagi Drop) may also be good choices.

For stories that feature more of the supernatural, try Cardcaptor Sakura. And if you haven’t seen Kiki’s Delivery Service before for the love of god go watch it! Another adorable story about a little witch trying to make it in the world. Little Witch’s Diary is worth a mention here as well – super cute, and the fairytale references are reminiscent of the Snow White reference we had in the beginning  Hooky.

For something that digs deeper into the darker side of things, with good people who have deep seated biases against something or the other, try The Pale Horse .

Hooky is a great, happy-go-lucky fantasy adventure that is just a pleasure to read. It manages to do this without coming off as too immature