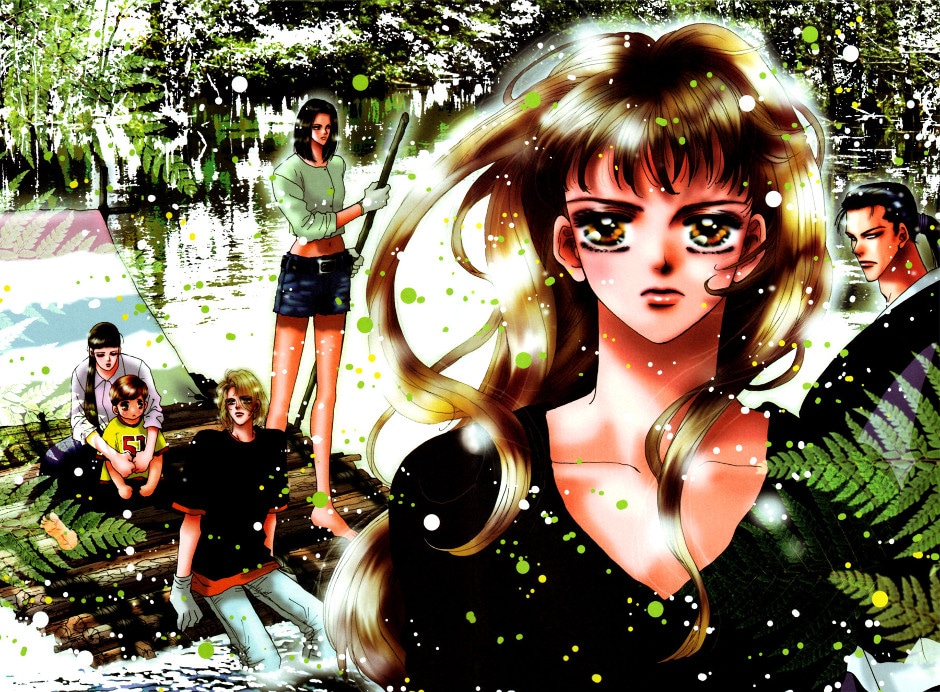 I’ve already put up quite a few discussion posts relating to this series, so I thought it was time to do a review. It has its flaws, but in a word – epic. Very, very, very good series, with amazing breadth and depth, and epic in a way that I would say surpasses some of my favorite shounen epics like Fullmetal Alchemist, because it doesn’t follow the stereotypical hero’s journey which eventually culminate in an OP protagonist saving the world. 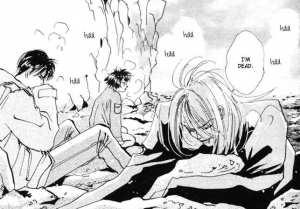 Sadly, the artwork is probably the weakest point of this series. If ever I hear somebody doesn’t like or cannot get into 7 Seeds, the reason is usually the artwork. The series started back in 2001, and the artwork reflects the older styles popular back then, with the large, heavyset eyes similar to that of Glass Mask or Magic Knight Rayearth. 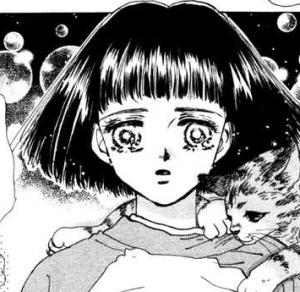 One of the biggest problems I have with this style of artwork is a lot of times I have trouble telling characters apart, but in this case the author has actually done a pretty good job of distinction, primarily with varied hairstyles and hair color. The premise also helps, since all 4 teams are scattered at the beginning, and at any given point you’re probably only following one group, and it’s harder to mistake someone for a member of Team Spring when you know you’re currently following Team Summer.

I’m a big fan of Glass Mask, so I’m accustomed to older art styles, but I wanted to add here that as this is a survival story, there are lots of interesting settings and lifeforms in the “world of the future,” and IMO the artist does a good job depicting crazy island landscapes, ruins of the old world, strange prehistoric creatures… and so on. 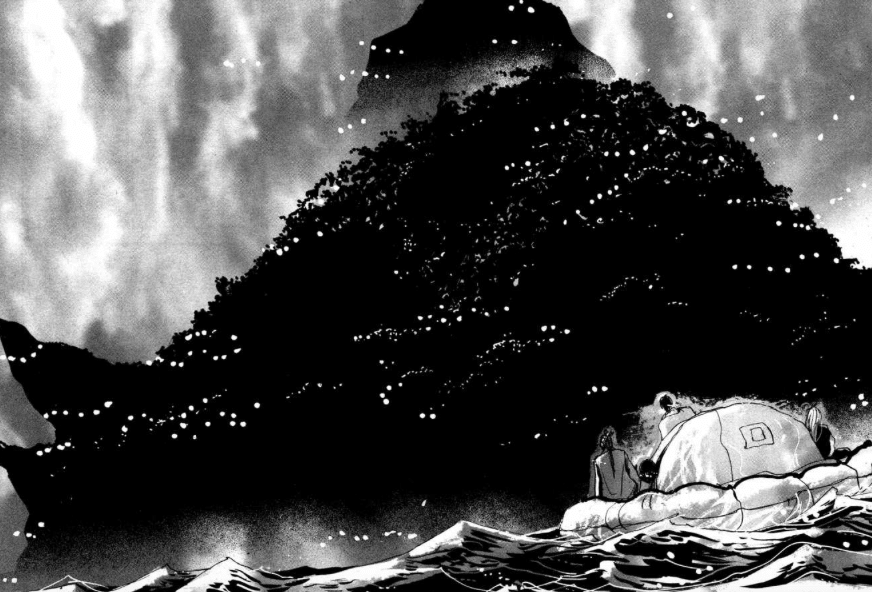 Lots of landscapes and natural phenomena

In any case, I would urge you not to be put off at this point and to go ahead and try the series anyway, at least for a couple volumes. The art style grows on you and the story is more than worth it.

All right, now we get to the good part. The story of 7 Seeds is *** amazing. In the beginning it seems like you’re following Natsu, a shy, antisocial girl, but you soon find out that this is a multi-POV epic, Game of Thrones-esque. I’m not sure I’ve ever read anything else quite like it.

Most shounens, even the good ones, have a definite trope. There is a hero, the hero goes on a journey, learns skills and gains allies, and somewhere along the way the conflict escalates to the point where the entire world is at stake. Good shounens escalate regularly and end when the hero defeats the final boss and saves the world (FMA, Rurouni Kenshin), less good ones run out of meaningful ways to escalate and begin meandering or force-escalating (InuYasha, Naruto, DBZ). Typically the conflict is man vs. evil. 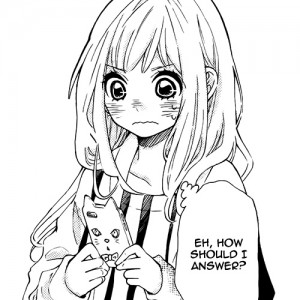 Shoujo heroine fights her own heart

Shoujo has a trope as well. Girl meets heartthrob, drama begins, events/jealousy/relationship progresses, girl grows and learns, story ends when everyone is together with who they like and live happily ever after. Sometimes the girl has to go through several heartthrobs to reach this point. Typically the conflict is man vs. man or man vs. self.

7 Seeds takes both those tropes and throws them out the window. It’s a survival story at its core, making the primary conflict man vs. nature.

In 7 Seeds, everyone fights nature

But rather than having a main character fight nature for the sake of the world in typical man vs. evil fashion (like Cage of Eden), 7 Seeds doesn’t have any single protagonist but rather jumps from team to team and spends varying amounts of time focusing on all the individual characters and their relationships, both with each other and the ruined world they find themselves in. It has all the elements of both shoujo and shounen conflict (at different times), but in a fresh setting which makes it unlike any other story.

And the setting – the author has outdone herself with the setting. The post-apocalyptic world is interesting enough to be a character of its own, with insects that eat prey from the inside out, fossilized reptiles that awaken when doused with water, mushrooms that destroy the ecosystem, and much more. It pulls the imagination so tight it just might snap, but the spark of belief is always there because, after all, it’s thousands of years after the end of human civilization, who knows what could happen? There is a lot in the way of exploration of the human psyche, and just what people may resort to in desperate times.

All in all, one of the best stories I have ever read. It’s not yet complete, but definitely on its way to becoming an all-time classic. I will be eagerly awaiting new releases now that I am caught up on the latest chapters (*sigh*).

…and so on. As I’ve said before, 7 Seeds is a multi-POV epic and that means that there are a lot of characters. Part of what makes it so interesting is seeing how characters with different backgrounds and personalities deal with very similar situations. That said, there are well over a dozen characters so rather than listing them here, you can check them out on the 7 Seeds Wikipedia.

However, my recommendation in this case would be not to even bother with the characters. There is no central protagonist, so you don’t have to check whether you’ll like him/her. Chances are there will be someone you like in the massive cast. Instead, my advice would be to keep reading until you’ve gone through the first two volumes (the first 8 chapters). At that point two of the five teams have been introduced, and you will get a sense of how the POV-switching works and be familiar with a good number of characters. You’ll know at this point if the series is not for you… Although I might still recommend you try and stick it out to volume four, because the segment on Team Winter is one of my all-time favorites. :p

If you’re caught up on the series, see the status of all the characters’ relationships in my 7 Seeds Relationship Chart here!

As 7 Seeds is such a long and involved series, there have been many scanlators on it throughout the years. Boku-tachi released the first five volumes before the group closed down on September 11, 2008. From that point on, Storm in Heaven picked up the series from volume 6 to partway through volume 13, at which point the group splintered and created a small subgroup called Rain Over Paradise, which focused only on the series 7 Seeds and Rain. They are still scanlating 7 Seeds today, which has been released up to volume 29, though Storm in Heaven officially closed down in 2012. 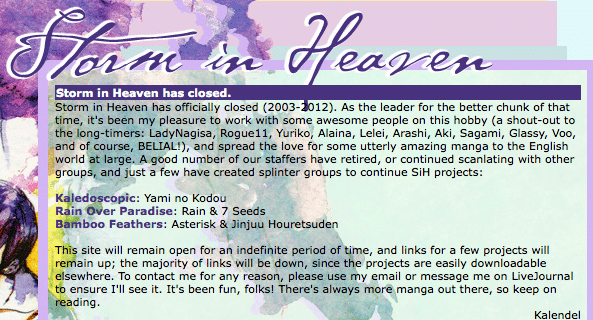 Out of these, the only recommendation I have would be to avoid the scanlations by Takejiro and 7 Seeds PRO, which are significantly lower quality in terms of cleaning, translation, typesetting… basically everything. It can be hard to find it on the manga-hosting sites, however, so for chapters 27-35, my recommendation would be to go to the Rain Over Paradise site to download these chapters manually and read them on your computer. The other 3 groups’ quality are not too different from each other, although they all chose to overlay sound effects, sometimes whiting out parts of the existing background.

Very high. The story is so long, broad and complex that it is very enjoyable to go back through your favorite arcs, if only to see how the characters you love used to be (because the characters definitely grow and change). Many of the arcs have gripping standalone stories as well which are fun to go back and go through. I’d say this is true of most long series (aside from the highly mystery-focused ones… but those aren’t usually too long), but especially true of 7 Seeds because 1) There is minimal angst, which is the #1 thing that makes me not want to go back and reread drama-based series, and 2) The world is so fascinating that action scenes which may begin to drag in other series (e.g. Naruto) are always interesting because you are also seeing crazy plants and animals and imagining their evolution, as well as ruins of various parts of Japan.

Side note: The various landscapes are particularly interesting if you’ve actually been to Japan and/or know the famous landmarks they are referring to (e.g. Mt. Fuji, Koshien stadium, Shinjuku… etc etc.), so I may be biased.

The most similar in theme would probably be Cage of Eden, which is also a survival story, although be warned that it follows more of a traditional shounen hero route and there are plenty of panty-shots. Psyren also kinda sorta has that prehistoric/post-apocalyptic setting, but I find it to be much weaker as a manga overall.

The author also has another very popular award-winning work called Basara. I wasn’t able to get as into it as 7 Seeds, but it has its own share of raving fans so it probably wouldn’t hurt to give it a try.

For something on the same scale of epic I would have to go with shounen mega-hits Fullmetal Alchemist and Attack on Titan, both of which have a lot of overarching mystery surrounding the world and the politics of the world. Saiyuki (and Saiyuki Reload) also come to mind. Despite the tragedies that occur, 7 Seeds is a story that leaves you filled with hope and positive feelings, which is why I’m choosing not to include darker epics such as Berserk or Vinland Saga, as those have a lot more of that lone-wolf angst thing going on.

If, and only if, the art style has grown on you and you’re in the mood to seek out some more older series to read, I highly recommend Glass Mask. It’s a classic. Pure shoujo, started all the way back in 1976 and still going strong. I am also a big old-time fan of CLAMP’s X-1999 as well as Kaori Yuki’s Angel Sanctuary, although be warned that they are all flawed in their own way. (If I had to go with one of them I would start with X-1999, as Angel Sanctuary can be quite frankly emotionally exhausting to read – you have to be prepared for that one.)

If you liked the strong female protagonist Hana, another story with a strong female protagonist focus is Reimei no Arcana. Somewhat cliche but a solid read if you’re not looking for something too deep. Otoyomegatari also has some of the most amazing female characters ever written (and absolutely gorgeous art), but it’s a much more peaceful and subtle sort of series, so it might not be what you’re craving right after all the action from 7 Seeds.

A masterpiece. Read if:

Do not read it: