Fact of the Day: Son Goku (Japanese), originally Sun Wukong (Chinese), was not originally so OP when he first burst out of the rock on Flower Fruit Mountain.

In fact, he was just a monkey that was a bit bigger and tougher than the rest. Okay, he was born from a rock, but let’s face it… monkeys aren’t that picky. All it took to hail him as the Monkey King was for him to rush through a waterfall into cave. Hardly astounding. 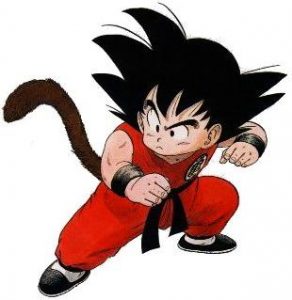 What often gets glossed over in adaptations or abridged versions of Journey to the West is the first two episodes, in which Wukong travels all over the East to find a teacher, and studies under the mysterious teacher known as Subhuti for seven years. From the description, Subhuti’s power may be strong enough even to rival Buddha himself, and it is he who teaches Wukong the 72 tricks and how to master the nimbus cloud. His only condition when Wukong leaves is never to reveal that he is his master.

Plus, Wukong might have been strong at that point, but still not totally OP. What really added to his power was:

So there you have it, that’s how Wukong came to be known as the Monkey King a.k.a. Qi Tian Da Sheng (齊天大聖) a.k.a. Great Sage Equal to Heaven as he titled himself. It all started with a stubborn monkey.

Note that the above information refers only to the original Journey to the West classic novel and not any other adaptations. Wukong/Goku as a character has been adapted in many different manga, with Dragon Ball and Saiyuki being the most famous ones. The Monkey King by Terada Katsura is also a worthwhile read that’s faithful to the original story.

Why This Fact: I wanted to share this fact because I noticed that inspired works often incorporate the monkey, his accessories (nimbus cloud + jingu bang), and a journey with his comrades in some form, but few stories mention his origins. In fact the whole idea arose from a friend criticizing Goku in Dragon Ball for being ridiculously strong for no real reason, like many shounen heroes (re: Naruto), which lead me to think how the true origins and story get lost over time…

The Difference Between Manga, Manhua, and Manhwa
Chobits Discussion: Deconstructing the Harem Romance
Danny Choo’s “Smart Doll” on the Verge of Bringing Chobits to Life
Reading Manga on a Tablet
Trends: Virtual Reality in Manga