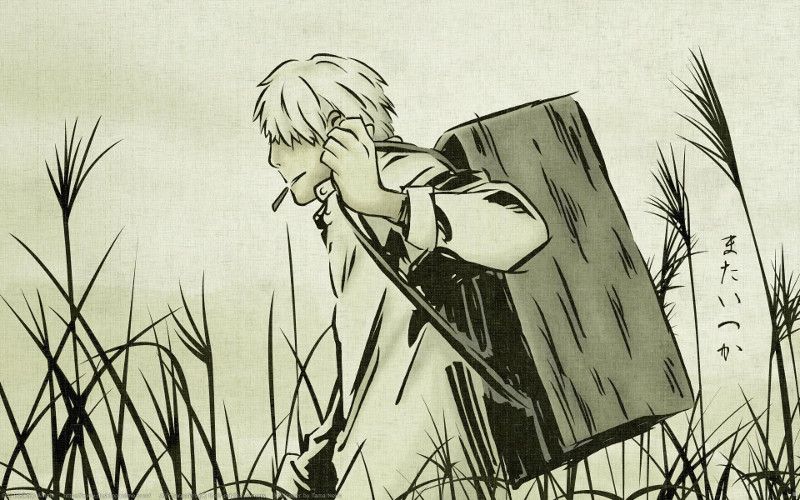 Today I want to review one of my favorite go-to mangas whenever I want to relax. I like to read before bed, and this is the one series I end up going to again and again for bedtime reading whenever I am at a loss for what to read, or just don’t have the energy to look for something new. It’s a very calm and peaceful series, and you definitely have to be in the right sort of mood to read it, but when you are, it’s excellent. 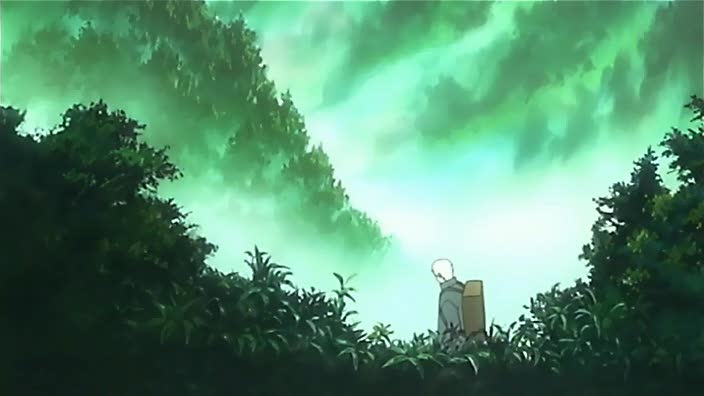 Scene from the Mushishi anime

The artwork of Mushishi is very… artistic, for lack of a better word. There are a LOT of landscapes and the author does a lovely job with her sketching and shading. I’m not much of an anime person because I hate waiting for the characters to say the text (I read much faster), but the backgrounds in the anime are exceedingly beautiful and done with full-color watercolor reminiscent of Studio Ghibli movies. If you are more of an anime person, I recommend you check it out. 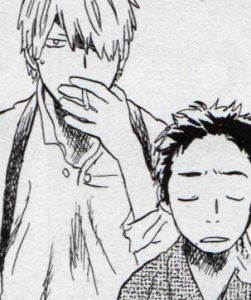 Characters in the manga

The characters are not the perfectly formed sparkly shoujo faces, nor are they the distinctive character styles of shounen. The eyes are smaller, and the characters tend to look just a little bit off, a little lopsided and not “ideally” formed, but its very lopsideness gives it a charm of its own. I really think styles like this grow on you over time, and once they do, the imperfections actually burn it into your mind and make it more memorable, like the art styles of Neon Genesis Evangelion and Saiyuki. 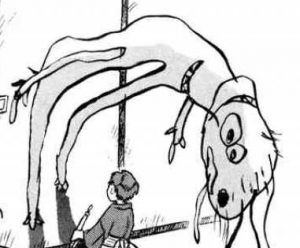 Kid whose painting comes to life

Mushishi is an episodic story. That means that each chapter is a self-contained story of its own, with all the stories loosely tied together under the premise of Ginko, a traveling mushishi. Essentially, Ginko is always on the move, and he arrives at various villages/places and takes care of strange problems with mushi that the people are having. “Mushi” in this case are considered to be supernatural primal creatures, often resembling in shape bacterium or plants, which have been around since the beginning of time and are generally not visible to the naked eye. There is some continuity to the stories – we find out more about Ginko’s background as the story progresses, and we also find out more about other mushishis and how their philosophies differ – but it’s not crucial to the enjoyment of the series. 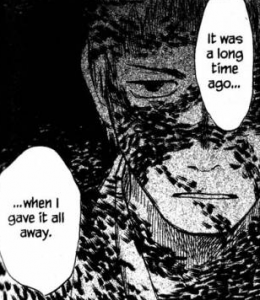 Man without a soul

The stories themselves range from mostly innocent (e.g. a boy who grows horns and is unable to hear due to a type of mushi) to occasionally dark (e.g. a man whose hand is able to attract animals, who becomes addicted to hunting and eventually starts hunting humans), but all of them are written with the same peaceful, quiet tone and a blanketed softness, tinged with the gentle feeling of live and let live. In contrast with other peaceful slice-of-life series such as Yokohama Kaidashi Kikyou or Aria, however, Mushishi differs in that there is a strong sense of the otherworldly. It’s the difference between someone’s meditative day-to-day life and a quiet fascination with various supernatural phenomenon. I myself am a sucker for Japanese spirits, ayakashi, youkai, what-have-you, so this is completely my cup of tea. If you are a fan of Studio Ghibli’s Spirited Away and/or all the strange creatures that tend to pop up in Hayao Miyazaki’s movies, this will probably also be your cup of tea.

With all that said, this is not an action packed series. This is the kind of story that is best on a rainy night, when you are alone, wrapped up in blankets with a nice cup of hot chocolate, and just want to read something calm and soothing. If you just finished Death Note or Nana are craving more, more, more intensity, I can guarantee you that you will be disappointed. 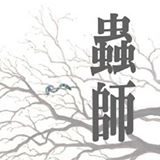 The Japanese character for the word “mushi” is this: 蟲. In fact, the Japanese word to refer to bugs/insects (and even worms!) is also “mushi,” but the character looks like this: 虫. As you can see here, the character for “mushi” in “mushishi” is the same character stacked on itself three times, kind of like the original mushi but more complex. The extra “shi” in mushishi refers to this character: 師, which means “master” or “specialist,” so “mushishi” as a whole means “mushi master” or “mushi specialist.”

(As a bit of an aside, the triple-character mushi 蟲 is the actual character for bug in traditional Chinese, while 虫 is the character in simplified Chinese. As I’m sure the languages diverged quite a long time ago, I’m not going to attribute any special significance to this.)

Given its episodic nature, Mushishi only has one main character that is consistent throughout all of the episodes, and that is Ginko, the mushishi. Some of the characters he encounters during his travels emerge again in later episodes, but they are few and far between.

Ginko is a traveling mushishi who has white hair and green eyes due to encounters with mushi in the past. The nature of his body draws mushi to him, and in order to avoid attracting too much mushi to one place and upsetting the balance of nature, he is constantly on the move. Compared to other mushishis, he has a very gentle attitude towards mushi similar to that of wilderness experts, and does not fall back immediately on “extermination” unless he deems it absolutely necessary.

Mushishi is in fact published in English by Del Rey, and if you can I urge you to find the copy at your nearest library or purchase the tankoubon. They’ve done an excellent job of translation and typesetting, and went to great lengths to preserve the SFX which I really appreciate, as a lot of sound effects in Mushishi are beautifully integrated into the artwork. They also have detailed glossaries of Japanese terms used, which are helpful.

Unfortunately, it seems like the volumes are only purchasable on Amazon through 3rd party sellers, although the Kindle editions are available through Amazon. I’ve compiled the Kindle editions into a single Amazon list for those of you who are interested. Hopefully at some point I can integrate this directly into the site which would be even better.

I’m not going to go into the details of the scanlation groups – there were quite a few, but the official published version is far superior, and the scanlations only cover the first few volumes and a few other random chapters anyway. In fact, much of what is hosted on the free manga reading sites are actually scans of the published English version itself, which is illegal!! I have nothing against high quality scanlations of licensed manga (though I urge folks to support the author when they can), which are often done before the series was licensed and can differ quite a bit from the official published version, but scans of existing publications are a whole other story. The laws regarding manga scanlation can often be murky and not well regulated, so please, choose at your own discretion.

Very high. Like I said, this is my go-to series any time I run out of something to read at night. The nice thing about episodic stories is that there are essentially many stories contained within one story, and the stories aren’t weighed down by each other – you can skip around as much as you want. For a series like Mushishi with 10 volumes, that’s 40+ stories right there for you to choose from. 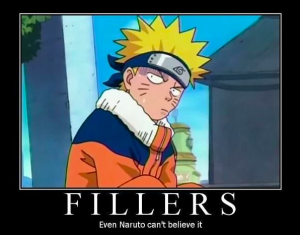 No fillers in Mushishi!

I also find that self-contained episodes are more of a pleasure to reread in general, compared to a long continuous tale. Part of it is that you don’t need context (what happened before and after?) and part of it is that there is never any sense of “old”ness or dragging, when the chapter adds nothing to the main story, OR you know exactly how the character is going to overcome the current challenge, which saps away a good deal of enjoyment.

Lastly, any short little stories like this are also harder to remember than a whole cohesive tale, so chances are even if you remember the details of a few episodes, you’ve forgotten others. Honestly by the time you get through all 10 volumes, you’ve probably already forgotten some of the ones from the first volume!

The first series that comes to mind is Petshop of Horrors. Also an episodic supernatural, with a little less of that peaceful otherworldly aura and a little more humor and warmth. New Petshop of Horrors is great too, although the main cast of the original Petshop has more chemistry and is generally more fun, while the sequel is more focused on the individual stories.

xxxHolic by CLAMP is another great choice, with Watanuki and Yuuko completing various supernatural/spirit-related tasks for people who come into the shop.

Natsume Yuujinchou is not bad but a bit weaker IMO. The main character reminds me strongly of Inuyasha. And there is also The Tarot Cafe, although the artwork is not the clearest and that causes the story to be difficult to follow at times.

I mentioned Yokohama Kaidashi Kikou and Aria above. Both of these are calm slice of life settings without the element of the supernatural, so if the supernatural part isn’t a must for you, it’s worth checking out. As is My Girl (Sahara Mizu).

As I’ve said before, if you are into anime, give the Mushishi anime a try. The backgrounds look gorgeous with color, and I’ve heard plenty good things. If you like Mushishi you’ll also like a lot of the Studio Ghibli animations. Hayao Miyazaki has a bent for nature and conservation, and Princess Mononoke, Nausicaa in the Valley of Wind, and Pom Poko (a personal favorite, but for some reason not that well known) are good places to start.

While we’re on the topic of great animation, you must try the ones by Makoto Shinkai. 5 Centimeters per Second and The Garden of Words are amongst the most beautiful animated features I have ever seen. And I mean ever. If you enjoyed the beautiful natural backdrops of Mushishi, you’ll certainly enjoy them.

A calming, otherworldly series that is great for those quiet days. Read if:

No really. I really believe you have to be in the right frame of mind to truly enjoy Mushishi. If you are not, a lot of what makes it good will be lost on you. If you are, it is amazing. So if you’re in the mood for action, go ahead and take a rain check on this one.