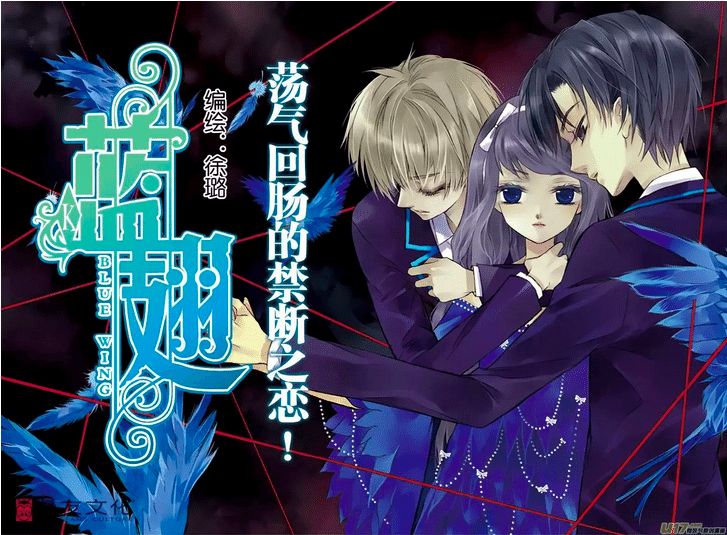 Lan Chi is a manhua I discovered while using the user-search method (will document this in another post) on Baka-Updates, and while there isn’t much of it out in the time being, is definitely one of those hidden gems that I will continue following.

The first thing that comes to mind about this manhua is that the artwork is absolutely breathtaking. Not only is it in full color, but the way the lighting and tone are blended with watercolor give it a very artistic, surreal feeling that the typical webtoon does not have. Typical webtoons like DICE and Kubera tend to have stronger contrasting colors and a flatter, two-dimensional feeling to the coloring which more closely match the idea of a “comic”. The softness of the colors in Lan Chi are somewhat reminiscent of the more toned-down shades in ReLife, but the watercolor adds another layer of artwork to the mix which ReLife does not have. I would venture to say that the only artwork I have seen that is more beautiful than this is the art from The Pale Horse by Choo Hae-yun, a true masterpiece. 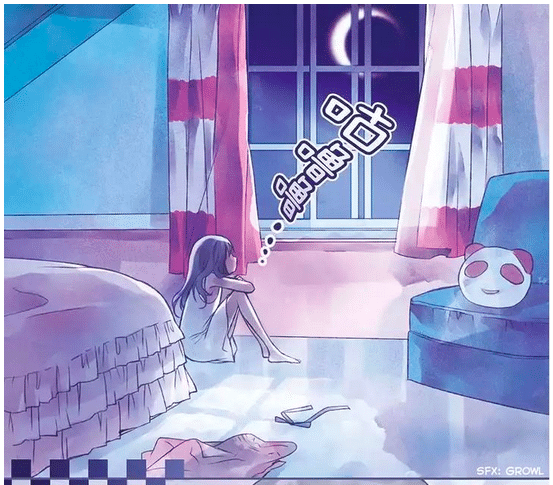 One other thing I like about the colors also is that they seem fairly consistent with the characters’ actual appearance in real life. I read a lot of colored webtoons and it starts to get old when characters randomly have blue, green or red eyes for no apparent reason (yes ReLife I’m looking at you…).

In Lan Chi, the characters have Chinese names but their mother is named Nancy, and it’s pretty clear that the three main characters are mixed-race (half-Asian, half-white) and that their mother is the Westerner. It is implied that Ming-lan herself was adopted precisely because she had the blue eyes of their deceased sister, and when she first attends school, the children at school excitedly ask whether she is a “halfie”. Aside from the three main characters, all the other children at school appear to be Asian aside from Bai Ting-ting, who may also be mixed race.

The other interesting thing about this manhua is that it is, in fact, not in a webtoon format, nor is it Korean. Korean webtoons from sites such as Naver and DAUM have been becoming more popular lately thanks to their full-color illustrations, but Lan Chi is from an independent manhua artist publication called U17, which seems to be solely dedicated to Chinese artists, and also does not follow the typical long-scroll format that the Korean webtoons do.

This and sites such as Tapastic indicate to me that online, full-color comic art styles are gaining traction worldwide, which is very exciting. As of late the traditional Japanese manga art style, especially shoujo with the sparkly eyes, have been getting to be just too much for me.

The story is still in its early stages, but so far it’s not your typical run-of-the-mill shoujo manga where the main girl gets adopted, is picked on/bullied by a guy who likes her, and then begins falling in love with him. Contrary to that, Ming-lan is picked on and bullied by the jealous younger brother, but he’s not doing it because he likes her, he genuinely hates her. She is also not the typical shoujo heroine with lots of internal monologues who tries hard to be cheerful and get along with everyone. It’s pretty serious stuff, but the humorous moments between the siblings and the occasional chibi moments balance out the dark aspects well. 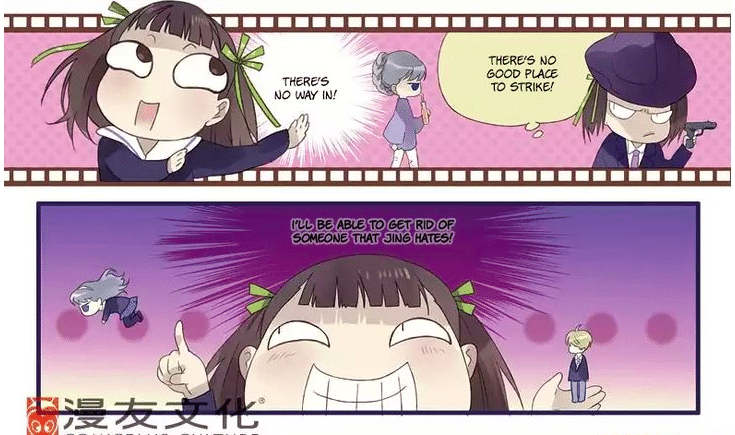 The author has hinted from the beginning panels that this is going to be a sibling romance, so I’m guessing down the line one (or both) of the siblings are going to fall in love with Ming-lan. Whether or not this turns out well, to me, depends purely on execution. So far the author has not disappointed me. I believe if we keep going at the current pace, with the subtle attention to detail and consistent characterizations, even the most cliche plot may turn out to be very enjoyable.

Each of the kids are very directed in their own way with their own hidden agendas, and overall there is a dark, almost sinister tone sometimes to the way the story plays out. Each one of the main characters is seriously messed up in some way, and it almost reminds me of the messed up relationships between Shinji, Rei, and Asuka in Evangelion.

Main character. You know she’s going to be messed up to begin with from the very first page, when Nancy brings her home and treats her as though she were her dead daughter, making references to how her room hasn’t changed and showing her clothes that she’s bought for her over the years. We don’t know what her real name is, but we do find out, in later chapters, that she has a blue wing tattooed on her back, which indicates that her past is going to be more complicated than we think.

This kid takes the cake. He and Ming-lan are such strong personalities, I really look forward to seeing their future interactions. We don’t know for sure what his purposes are either, but he is clearly manipulating Bai Ting-Ting’s affection for him and using it to get close to her father. He definitely cares for his family, and outwardly is the model son and student, but his actions (treating Ming-lan kindly and then throwing the handkerchief away, sending Ting-ting’s father poisoned wine) show that he’s got a much more sinister side to him, and on top of that he is likely highly intelligent and calculative.

Probably the most normal one of the bunch. If anyone had the potential to become a Shinji, it would be him. Looks like he’s been babied by the family since youth due to being the youngest and his heart condition, and he’s suffered quite a bit due to his illness and past history with Tang-yuan leaving him frail and generally with a weaker spirit than the other two.

We don’t have her full backstory yet, but we know that Tang-yuan is cheerful and popular on the outside, but also has a heart condition. She feels isolated from her friends at school and tells Jing that the two of them live in a different world from the others, because everyone else lives in a world where they can run freely without worry. I’m guessing she also feels a certain sense of falseness that Jing wouldn’t feel, because she did not tell any of her “friends” about her condition and has to work constantly to maintain a false front.

OK, I know I mentioned Evangelion earlier already, but I just want to take it one step further because I find the character comparisons fascinating.

Evangelion was centered around Shinji and his relationship to the two girls Rei and Asuka as well as to his father Gendo. Lan Chi, in my mind, takes these relationships and flips them on their head. Instead of a story about Shinji, this becomes a story about Rei.

If Ming-lan was Rei come into her own person, then this could be the story of Rei and the two men in her life – Gendo (Ming-qing) and Shinji (Ming-jing). Think about it. Gendo is dark, manipulative, and ruthless where Shinji is whiny and a crybaby. If we take this one step further, her one friend Tang-yuan strikingly resembles Asuka in her relationship to her, in that she is interested in Shinji (Ming-jing) and jealous of the two of them, and at the same time becomes both ally and foe to Ming-lan. It’s not an exact fit by any means (for one, Ming-qing isn’t Ming-jing’s father and they don’t have a completely twisted relationship with one another), but the archetypes are similar enough for me to imagine – if we told the story of a Rei Ayanami incarnated into another universe with the two men in her life and Asuka beside her, maybe, just maybe it could be something like Lan Chi. 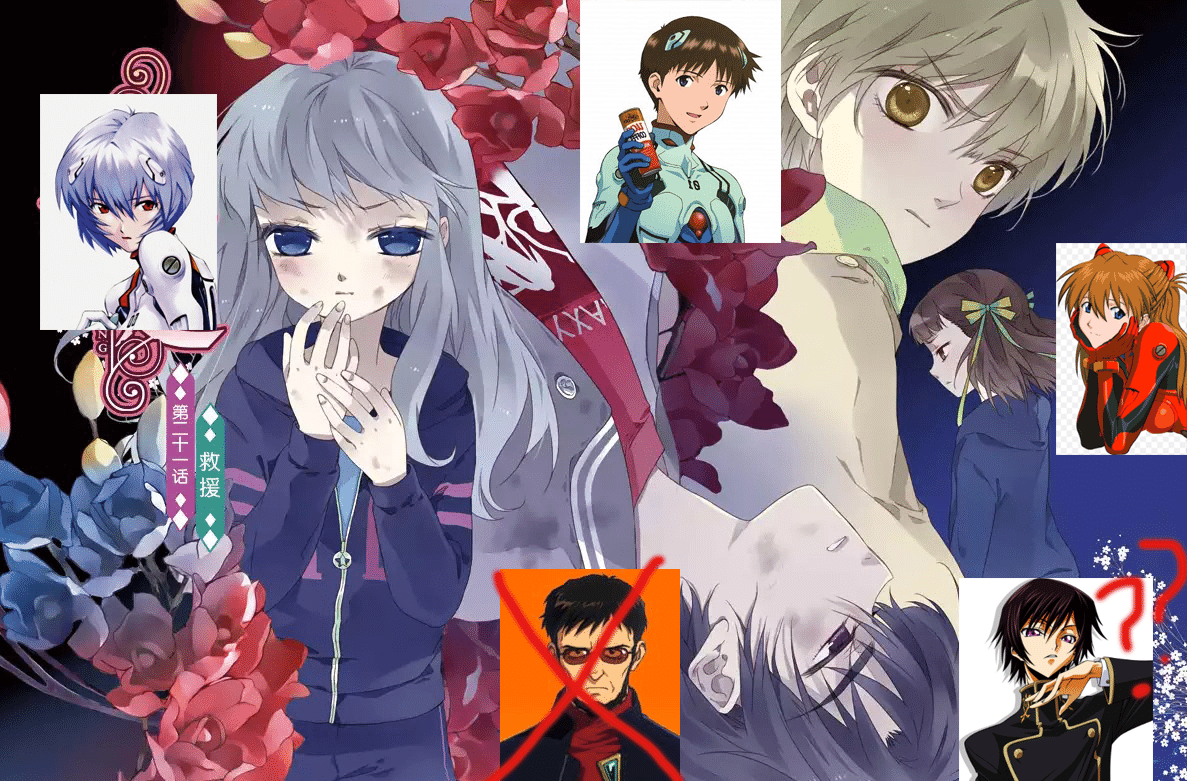 After making a comparison chart for fun, it occurred to me that the one character which doesn’t quite fit the picture is Ming-qing. Even from before his wife died, Gendo Ikari was a little bit insane and didn’t socialize well with others. Ming-qing, on the other hand, is the complete opposite. He not only socializes well, he is able to manipulate others with his charm and intelligence. If anything, he reminds me more of Lelouch from Code Geass.

As more of the characters’ personalities and rationale emerge, this concept may be tossed in the trash, but it’s still interesting to think about. o(≧∇≦)o

Having read the English translations, they are pretty good. The translator also does a good job of annotating jokes and hard-to-translate idioms at the end of each chapter so readers have a better understanding of what is going on. 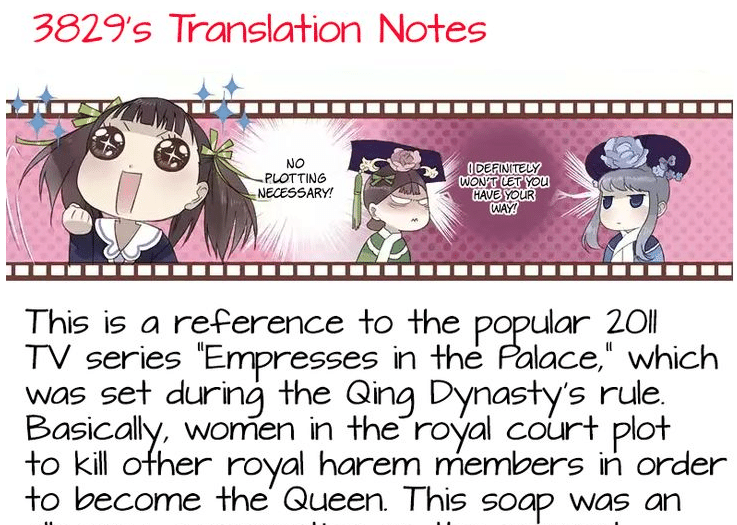 The fonts and editing from the editor are also pretty well-done, and the fonts match well with the original manhua. That said, this is my personal bias, but I think Chinese names translate less well into English than Japanese or Korean names and for that reason I would still strongly prefer the original. Not to mention there are some Chinese-only jokes which play on the pronunciation of certain Chinese words, which would be literally impossible to translate to English.

The Pale Horse is definitely the most similar story to this one that I can think of, in both mood/tone and art style.

Crepuscule by Muchi is a good one as well. It got rebooted later on into Crepuscule by Yamchi, but IMO the earlier drawings by Muchi are better and it’s worth it to read the Muchi version and switch over to the Yamchi version where the plot picks up.

Clover by CLAMP is also a good one, although it is not in color and the abstract art style and artistic storytelling means it may take a few reads to understand what is going on.

The author Xu Lu AKO has several other works, including Prince Bubble which I read and found to be OK. If you like the art it’s worth a read, but Lan Chi overall has a more gripping story IMO.

One last recommendation I have that is not a manga would be the Mystery Otome Game X-note by Zeiva. That one goes a little more down the creepy and borderline horror route, but otherwise I was reminded strongly of it as I was reading Lan Chi.

Great start to a potentially amazing manhua. Would recommend. Read if you are in the mood for:

Do not read if you are in the mood for: