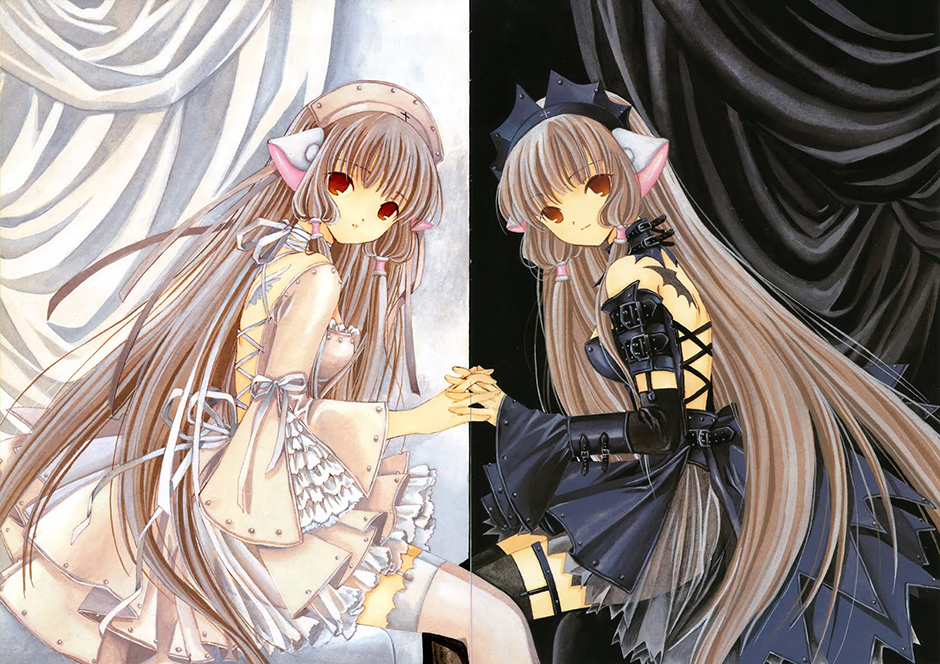 For the first CLAMP series of the week I’d like to go with an oldie but a goodie – Chobits. On the surface this series is a romantic comedy between an average guy and a (smoking hot + naked!) android girl that falls almost literally right at his doorstep, and of course don’t forget the hot landlady, hot teacher, and hot coworker that’s he’s constantly having run-ins with. Cliche much? But once you get past all the fanservice, Chobits actually goes much, much deeper than that.

Chobits’ artwork is definitely one of the cleaner ones, as far as CLAMP art goes. For those unfamiliar with CLAMP, Apapa Mokona, the chief illustrator, has a very distinct style pre-2000s marked by large, bold eyes with heavy lines and characters with squarish looking frames. The art also tends to include lots of background detail (wings, petals, thread… etc.) and packed, busy panels, although it can vary from series to series.

It’s not until Cardcaptor Sakura that they start getting into more cutesy styles, and from Angelic Layer on the faces become notably softer and the bodies more slender, often disproportionately elongated to create a feeling of elegance.

So what do I mean by “clean”? Well, Angelic Layer and Chobits are two of the earlier series to experiment with the new style, and most noticeably they do not have ornate backgrounds. While CLAMP loves their flowing lines and, of course, cannot resist drawing beautiful long hair, the backgrounds in Chobits tend to be simplistic, with plenty of white space a little in the way of flowery embellishments. 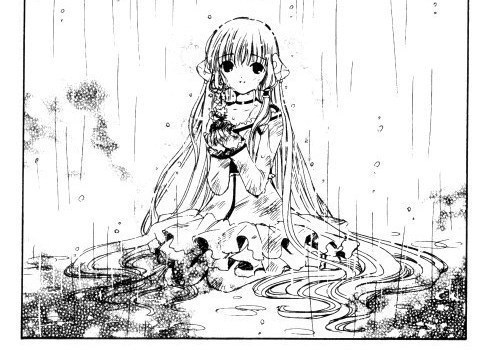 Chobits also tends to be a very softly colored manga with pastels on its color pages. Personally, I love the artwork because it’s not too busy (easy to figure out what’s going on), and, despite some parts being more ornate (mostly the outfits), doesn’t feel too “sugary” like many shoujo mangas (think Sailor Moon). But whether you’ll like it? Is up to personal taste. Just see if you like how Chii looks and you should know. 😉

The story of Chobits is what is really great about it. You can take it at face-value for a lighthearted comedy with some sci-fi mixed in, but at its core, Chobits is about loneliness.

It takes a lot of stereotypes from typical Japanese manga (more specifically the visual novel) and turns it on its head. Instead of being the same old thing, these very same stereotypes are cleverly manipulated to illustrate various aspects of the human-computer relationship, and raise some serious questions about our technology filled lives today. For example: 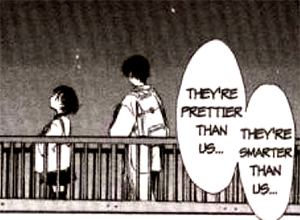 These are some big questions. Yes, Chobits does contain a lot of random panty shots and accidental booby flashes, but nestled behind that is so much more. In this seemingly simplistic story is a darker, more philosophical take on society today which stayed with me long after I put down the books.

Now, did the ending of Chobits actually do a good job of answering all these questions it raised? Some people say no. I say yes. For a more detailed (spoiler-filled) analysis of why, stay tuned tomorrow for my discussion post Chobits: A Deconstruction of the Visual Novel Genre.

I also want to note that Chobits employs an interesting storytelling method of a “story within a story” which I quite enjoyed. Throughout the story, we get to read a picture book entitled “A City with No People” which Chii reads, and the story of the picture book in turn mirrors and adds depth to Chobits’ existing themes. 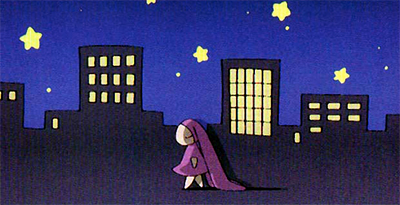 A City with No People

Additional note: The anime ending is significantly different than the manga, and I personally do not recommend it.

A young working professional who came to Tokyo from the countryside and is completely out of touch with modern technology. He discovers an abandoned persocom shaped like a cute girl in a trash dump, and takes her home with him, but soon discovers that she may hold capabilities far beyond his understanding.

The beautiful persocom that Hideki discovers, who awakens with no memory but is somehow able to move without an OS. She learns quickly, like an innocent child, and, like all persocoms are programmed to do, tries her best to make her master (Hideki) happy. Computer-savvy characters suspect that she may be a “Chobits,” a rumored legendary computer model made by the inventors of persocoms himself.

I’ve said this above, and I’ll say it again. Chobits’ scanlation quality is horrible. Please do not read the scanlations or you will have a subpar experience. It’s not fully scanlated to begin with, and the official version is far superior than any fan versions you’ll find. Either that or you’ll find actual scans of the official English version released by Tokyopop, which is illegal distribution of licensed content that I do not condone.

The last time I checked you could get individual volumes off Amazon for just $0.01 + shipping, which comes out to less than $5 if you live in the US. If anyone knows of any cheaper sources let me know in the comments and I’ll add it in!

“Persocom” is equivalent to “PC” in English.

As for the Tokyopop version, I am actually pretty satisfied with it, with the exception of one small thing. I don’t know why they chose to keep the Japanese romanization of the word “persocom” in the series. I might delve into this more in detail some other time, but tl;dr “persocom” in Japan is NOT a special term, it’s used everywhere and is equivalent to the common English shorthand “PC”. You know, like your Windows PC. I don’t know why they chose not to translate it that way, it gives off the impression of a special sci-fi term that the authors invented for the future when it’s clear the authors had chosen a common term that would be easily relatable to everyday life.

I would say Chobits’ reread value is pretty high, because it’s not meant so much to be a lighthearted comedy as it really is meant to make you think. And I love the world they’ve created – just the world itself makes you think. The panned out shots of Tokyo with persocoms mingled into the crowd is definitely one that gives you pause. And there are some great, clever moments as well. I reread certain bits just to see Plum (a “laptop” computer which looks like a miniature doll) dance around while she’s in screensaver mode, or write out a map by hand instead of connecting to a printer because her owner thinks it’s cute.

Definitely read Angelic Layer, set in the same universe and serving as a prequel to the events in Chobits. I also highly recommend checking out other CLAMP works, the most similar being Wish, Kobato, and Tsubasa:Reservoir Chronicle.

If you want more philosophical exploration of the relationship between human and machines, try Ghost in the Shell and its sequels. I would also recommend checking out the Animatrix and the movie Blade Runner (although be warned these tend to be a lot more serious and a lot less cutesy).

If you want almost the exact same setup, with an innocent (non-human) girl somehow ending up moving in with an average guy, I’ve heard DearS has a plotline almost identical to Chobits, though I myself have not rea dit.

And lastly, if you enjoyed the cute girls and soft, romantic atmosphere, try reading, watching, or playing Clannad.

Worth a read, particularly if you are interested in how technology impacts our lives today. Read if: